No one gets married simply to get divorced, but of course, divorces happen. Divorces can be difficult
and costly, even in the best of situations. Many seek a do-it-yourself approach to dodge high lawyer
fees. It is crucial, however, to understand how these formerly amicable plans go awry. Here are 5
unexpected elements of these DIY Divorces.

The Price of Pausing Your Life with a DIY Divorce

A big thing to think about when going for a DIY divorce is the amount of time that it will take.
With a lawyer, divorces can drag on, but they can be much longer with a DIY approach, even if
they are amicable.

This time won’t be easy, so it would be best to prepare ahead of time. Just like that period in
between jobs, there are many hidden costs involved with enacting long changes in your life.
Keep this in mind and budget money and emotional expenses accordingly.

Photo by cottonbro from Pexels

Setting Up a Significant Childcare Plan

Obviously, if you are divorcing with children that are under 18, they are more than likely at the
forefront of your mind. That’s not being called into question. The real danger in DIY divorces
here is that few people understand the struggles of custody discussions until they experience
them.

This needs to be a very tactile conversation and is best handled with a lot of patience and
foresight.

You have both taken the time to think of what your expenses will look like post-divorce, but you
might be overlooking one large setback — that your taxes are about to change vastly! It might
be time to bring in an accountant.

Depending on how long you have been married, you may be pretty used to these benefits by
now. That all changes come April, and if you haven’t planned for this ahead of time, it can hurt.
So start right away, even before it is finalized, and have a discussion about it.

The Role of a Lawyer

This one may seem obvious since the entire point of a DIY divorce is to avoid the costly fees
associated with having a lawyer mediate and process your divorce. That being said, it is
something that many people often overlook.

Who will be performing all the things that this costly lawyer would do, such as filing the correct
paperwork in the correct county? The county clerk accepting the forms will not be able to give
advice. That all adds to the plates of both parties involved.

The Toll of Double Duty with a DIY Divorce

Outcomes may differ from person to person, but the emotional burden of performing two roles,
both the divorcee and the third party mediating the divorce, is often overlooked.

Putting aside complex emotions to be equitable or at least civil while navigating a divorce takes
a heavy toll on soon-to-be ex-couples. Budget your time so that you are giving yourself plenty of
time and space to recover. You’ve earned it.

Hopefully, this has brought to your attention some of the more unexpected elements of a DIY
divorce. With luck, it might even help you avoid a significant pitfall that can come from these
incredibly unpredictable events.

If you still decide to go the do-it-yourself route, GreenSeal Notary can notarize your divorce
documents online for you. Each participant can be in a different location from anywhere in the
world. For example, you might need a waiver of service notarized. A waiver of service basically
means that you won’t be served by a process server, sheriff, or through certified mail.

If you waive your right to be personally served with a copy of the DIY divorce papers, you would
not receive notice of the lawsuit. If you have already received the divorce petition and don’t want
the potential embarrassment of being served, then a waiver of service might be appropriate . The
waiver of service must be signed in the presence of a notary and filed with the court.

In addition to the waiver of service, here are other documents in a DIY divorce that will need to be
notarized:The Initial Complaint or Petition For Divorce

Fill out the form below if you need your DIY divorce documents notarized online. Online notarization is legal in all 50 States. 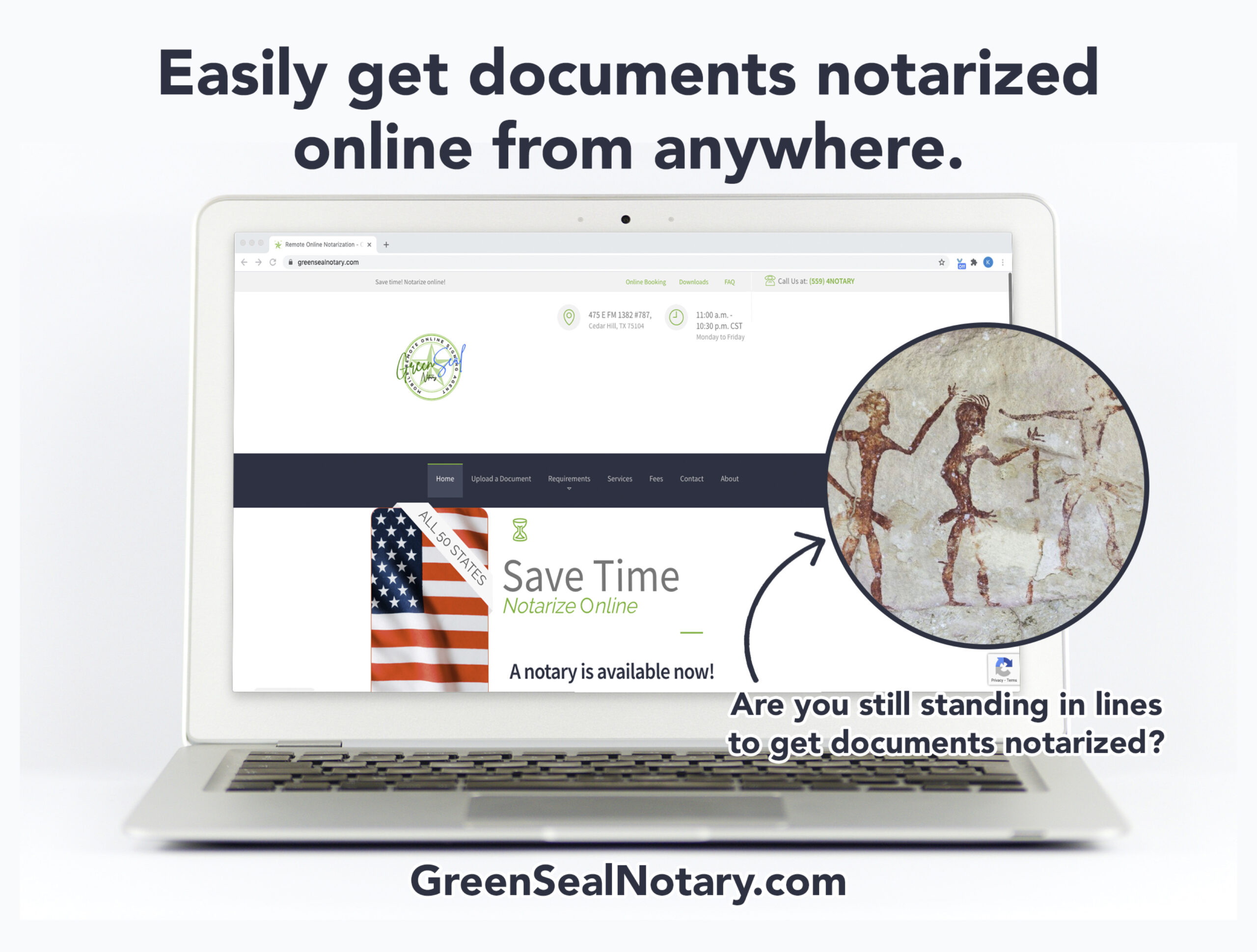 How Our Online Notarization Works

The items that will be needed for the meeting are as follows:

Front AND back of a state issued ID (drivers license or state ID).

View a video of the process

Back
I'm Ready to Upload My Document

Please add information for the primary signer.  You can add additional signers later in another step.

We must notarize the name as shown on your ID.  Please be sure to check with the person requesting the document to ask if you may sign your name as both the name listed on the document AND the name on your ID.

You may notarize up to 5 documents per session.

You may have up to 3 signers (including witnesses) per session.

A Texas notary can not serve as a witness and the notary on the same document.

Please note:  any witness must meet the same identification requirements as the signer and must go through the same authentication process.

When would you like to have your document notarized?

This is how much your service might cost today.

Extra fees may be added for additional signatures and/or seals, if applicable.

Sorry.  This code doesn't exist or has expired.

Thank you for submitting your document.